Why Go to Couples Counseling? - Part 4 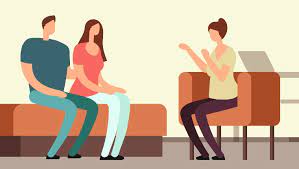 Why Go to Couples Counseling? - Part 4

While mental health awareness has improved, especially over the last few years through the pandemic.  And some of the sitgma around therapy has decreased.  But so many people still wonder why they should participate in couples counseling.

In my mind, there are several "levels" of couples' counseling.

If you'd like more direct and personal help with improving communication in your relationship, or you're already to the resentment stage, please visit my website and schedule a free 15 minute consultation - www.brittaniedmillslmft.com.

I provide online couples counseling throughout California and Florida.

Popular posts from this blog

December 11, 2021
We've spent the last 10 weeks discussing the Fair Fighting Rules for Couples.  Let's summarize. Rule #1 -   Before your begin, ask yourself why you feel upset. Don't go into an arguement or discussion without knowing why you're upset, otherwise the discussion won't be productive. You need to be able to explain your feelings and how the situation has hurt you. And you need to stay focused on the issue at hand. If you'd like to read the full post for Rule #1, click here : Rule #2 -  Express your feelings with words and take responsibility for them; own and express your feelings, respectfully. It's important to use words to share your feelings. You need to describe how the situation makes you feel and why. Use "I" statements instead of blaming your partner. For example, "It scares me when you don't call when you're coming home late, because I get worried that something bad has happenedd to you." This is owning your own fee
2 comments
Read more

How to Manage Anxiety - Part 3

July 20, 2022
How to Manage Anxiety - Part 3 In Part 2 of this series on How to Manage Anxiety ,  we talked about Positive Visualization. Drop a comment below to share how the exercises helped you or what you noticed when you tried them. Over the next few weeks, I'm going to share some tips on how to manage anxiety, especially for those who are considered High Performers.  Maybe you're in a Leadership or Executive Level and you're excelling at your job, but deep inside, every day is a battle within yourself. Together, we'll look at some strategies you can use in the moment of anxiety, that no one else even has to be aware of.  Because, let's face it, you don't want everyone else to know just how anxious and uncertain you're feeling. The next tool is the 5-4-3-2-1 Exercise.  I know you're probably asking, "What the heck is that?" It's sort of a way we can trick our mind or distract it from the thoughts that are causing anxiety. Again, these are things
Post a Comment
Read more